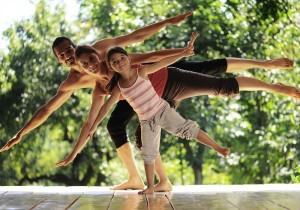 Do your children get excited when you say, “Ok kids, let’s exercise!”

Mine don’t.  And I’ve tried many times and many ways – sometimes successfully, sometimes not.  After struggling with this for too long, I decided to just do the right thing…

Here are ways to give kids a serious workout without them realizing that they’re exercising.  But this is more than just a list.  As a basketball and baseball coach, instead of making my players run boring sprints or laps around the diamond, I figure out ways that will both improve their skills AND get them breathing heavy and building muscle.  This way, their athletic skills improve, THEY see the improvement, and they don’t even realize (or have time to complain about) they’re doing sprints.

That’s what this list is about – taking things you probably already know to do and makes them even better.  All you have to do is be creative and involved enough so that you can build upon these examples and turn normal activities into something crazy fun and healthy.  (Do I need to say that if YOU get involved as a parent (aunt, uncle, grandma, friend…), not only will the kids absolutely love it, but you’ll get a lot of exercise, too?) Frisbee is an easy pick-up-and-play game.  But instead of just throwing it back and forth, I make challenging games out of it.  If we’re at the beach, I say, “Ok, this is a STARMAKER!  I’ll throw it out over the water and you have to run as fast as you can, jump in the air, catch it, and create a major splash into the water.”  That’s a lot of muscle groups!

Sometimes we’ll play the “Have to roll or do a cartwheel before catching it” game.

Or if there’s more than one kid, I’ll have them race to see who can get to it first without it hitting the ground.  (I’ll give the younger kid a healthy head start and challenge the older to STILL win.)

Ultimate – This is wonderful, fast-paced game not requiring a lot of natural athleticism, that can be played by most anyone.  It’s like football with a Frisbee.  Google ultimate Frisbee and you’ll be thinking about rounding up kids and adults for a trip to the park.  And it’s a lot more fun to play than it looks.

If we’re just shooting around with a basketball, I’ll throw in a weird twist:

Their feet cannot touch the ground while the ball is touching the hands.

This turns a simple time of shooting baskets into a good 20 minute workout of leaping into the air since they now have to jump to catch the ball, but jump high enough so they can also quickly shoot or pass before they land.  It’s quite fun, and pretty soon they are out of breath and laughing.  (And they’re learning some major skills in the process.)

I live near the Appalachian Trail.  Something you may not know is that all 2175 miles of the trail is marked with small, white blazes as a guide.  When we go for a day hike, I make the kids responsible for finding the blazes and following the trail.  They absolutely love this!

I also bring a topographical map and veer quite a ways off the trail and make them find their way back using the map alone.  (It’s best to do this with hills for two reasons; 1) Easier to follow the map, and 2) more exerce.)

I also discuss a little history about when the Pilgrims landed and they tried and tried and tried to talk with the natives, but they would always run off.  There is one account that the settlers ran literally for hours as the Indians essentially toyed with them out of curiosity.  A play hide-and-chase through the forest is definitely good exercise.

And since I live in Massachusetts where this really took place, it’s a perfect time to share a little Revolutionary War history by re-enacting what it was like to fight with muskets and run for cover.

Find a state or national park with hiking trails and explore these in more depth.  Give out notebooks and a scavenger hunt list (looking for unusual plants, insects or wildlife, as an example).  Google “hiking scavenger hunt” and you’ll find several sites with lists already made for you (animal tracks, animal homes, moss, spider web, just to name three).  If you have a digital camera, have them record their findings and maybe even document their adventure in a scrapbook.

Geocaching is a high-tech treasure hunting game played throughout the world by adventure seekers equipped with GPS devices. The basic idea is to locate hidden containers, called geocaches, outdoors and then share your experiences online.

This is the greatest thing!  And chances are very high that many exist right near you.  I live in a very small town in Western MA and several exist within a half-hour’s walk.  Google this.  If you haven’t heard of it before, you’ll thank me!

Little trampoline in the house

During the winter when it’s more challenging to get outside and exercise, I put a little trampoline right in the living room.  I’m not a perfect politically-correct parent.  My kids watch TV and play video games.  The difference is that, just because it’s there, I bet my kids bounce for literally miles every day.  Here are some things we do:

The bouncing games can go on forever.  I often see these really cheap at tag sales.  We actually have two.  I guarantee you that if you set up two little trampolines in the living room there will be some people getting a LOT of exercise.

Make the world’s longest hopscotch at a school playground, sidewalk, or wherever.  Using sidewalk chalk, make one to 50, or a ridiculously long 100.

Spell out a giant word, in cursive (when they realize they’re jumping on a big “I love you so much!” that makes it even better)

Don’t limit to a flat surface.  They can jump and touch the side of a tree, or over a bike, or land on a big rock or picnic table.

Make their legs nearly do the splits

Force one leg for a long time

Make really long jumps – with both feet, or many consecutive long leaps one foot to the other

Create treacherous “Alligator” jumps:  skinny paths or tiny landings, draw alligators on the sides.  “If you fall, you get eaten and you have to start over.”

As they land on some squares, they have to answer questions: e.g. QUICK! Name 3 things that can fly without feathers, or do simple math puzzles to determine the next path.

The cool thing about giant hopscotch is that it’s fun making it, the neighbors will join in, and big kids will be drawn to it (like me).

Set up teams and play (capture the flag, Secret Service protecting the “President,” each man on his/her own, and so on).

With good hiding places, there should be a lot of running, especially since you can sometimes avoid nerf gun ammo shots with speed.

Set up an obstacle course in your yard or neighborhood – something that will remain the same for a long period of time – and keep record times for age groups and boys or girls.  The fastest time for each week (or day) wins a small prize.

“Run to the back of the house, touch below the middle window, run to the big oak tree and run around it 3 times, etc.”

Have every family member wear a pedometer, and have a daily challenge to see who can take the most steps. Losers do winner’s chores the next day!

Have a traditional water balloon fight, with plenty of chasing, and wetness

Get a water balloon slingshot and have victims run through the danger zone as fast as they can while someone shoots away.

There are several really good video games that get the heart pumping:

And many others.  Go to Amazon.com and search on Wii exercise games.

I have a plastic, 3-pronged boomerang and this thing is awesome.  Bring it to a park or school field.  It rarely comes right back, so your child will get plenty of exercise chasing that thing down.

Make clues leading to the next clue’s location.  Make them go up and down stairs plenty of times.  Your kids will ask to do this again and again.

Hit tennis balls into the backstop – hit a LOT, and toss from behind or from the side, to different locations (high and inside, low and outside, etc.)

Use a pitchback – angle it for flies and grounders

I like to do what I call “starmakers.”  This is where they catch a fly ball on the run, or dive for grounders.

Stand with back to the backstop and throw short-hop balls – the kind that land just in front of the fielder, and to the side.  (Do this with catchers in full gear.  10 minutes of this and they’re out of breath.)  After fielding 20-30 of these daily, your baseball player will be able to handle any ball landing within six from him.  And his/her confidence with fielding grounders will improve immensely.

With most any activity, many people would be glad to pay an enterprising child to do the hard work.  Get paid to exercise?!

Now that you have those, here are even more ways to get your kid to exercise: