Past Life as a Persecuted Healer

A woman contacted me and said she’ll be in town for just a few weeks while she teaches a course at Kripalu (a renowned yoga and spiritual center here in the Berkshires).  She said she was recruited back to a resort in Vermont “for the 1%,” as she described, because people really got results from her healing and massage work.

Her problem was that she wanted me to help her get over her addiction to the ADHD drugs Adderall and Vyvanse.  Because she had dyslexia, anytime she had to read anything, especially in school as a kid, it caused extreme anxiety.  It was just so hard to do this thing that everyone else could do without even trying.  She struggled with this her entire life.  And now, with this new job, it takes her hours and hours to stay focused and read and fill out the health forms that it takes everyone else just a few minutes to do. But then, when she’s on the drugs, in numbs her intuition so it impedes her ability to help people heal.

The first session consisted of deepening suggestions and “exercises” to help her not be so controlled by the anxiety and the inability to focus when she’s doing the paperwork, but also to strengthen her ability to connect with her clients spiritually so she can more effectively help them heal.  To deepen the hypnotic state, I asked her if there’s any place she’d like to go, real or imaginary.  She said, “I’ve always felt drawn to mermaids.  Can you guide me to the ocean so I can be a mermaid?”

I once read that mermaids existed in Atlantis.  Also, just a few weeks prior, a different client came to me for weight loss, who happened to also be a Reiki Master.  She was intrigued with the stories of Atlantis because they supposedly were advanced healers who used crystal energy and all those good things.  So, having Atlantis fresh in my mind, I guided this new client there for the session.

(As a side note: It doesn’t matter to me if Atlantis was truly real or not, but I will say that I’ve read a lot about it.  What was interesting was that both clients, who admitted that they really knew very little to nothing about Atlantis, described very similar experiences – details that do not exist in the 10-20 books I’ve read.  Also note that I don’t tell people what to see in a session.  I say things like, “Far off in the distance something captivates you.  Describe this to me…”)

So, with this Atlantis journey combined with the various suggestions, the client went away hopeful that this is really going to help.

She came back to the second session with a mild breakthrough:  “I actually think I am afraid to be the true conduit of healing energy.  I am afraid of being 100% open to channeling this energy.  Why would I be afraid?”

(I should mention something else:  When I do sessions, my number one priority is to build rapport.  If I need to build rapport with a tree-hugging yoga master healer, I easily draw on a ton of books I’ve read pertaining to life and spirituality.  If someone is religious, I connect in that way, having also read the Bible a few times.  For others who aren’t in to any of that stuff, I “keep it real” and just take them for a hike or a walk on the beach or a ride on their motorcycle.

Hypnosis, in my opinion, is a very spiritual thing.  It’s very “meditative.”  But people don’t have to be in to all that stuff to respond.  I say this because I don’t want someone who’s considering a visit to Berkshire Hypnosis for the first time to think that I’m going to guide them to Atlantis or into pyramids or ask them to become one with themselves and the Earth.  I just have fun with that when someone is really interested in those things.  Even now, as you read this, all you have to do is take in a deep breath every once-in-a-while, focus on the words and the images they create, then let your mind wander.  That’s it!  No big deal.

Ok, back to my session…)

So, she was afraid to do this thing she also said she feels she was meant to do her entire life.  Why would someone be afraid to do their calling?  I had my suspicions so I asked if she knew about the Akashic Records.  “Yes, but not really” so I described them briefly… 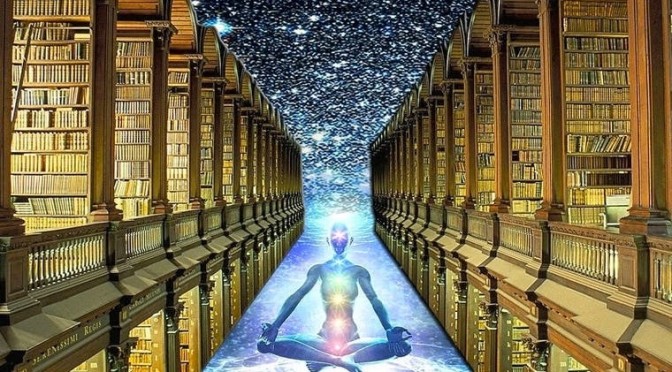 The Akashic Records or “The Book of Life” can be equated to the universe’s super computer system.  People, or souls, rather, can access them to gain an understanding of their complete soul’s experience throughout all lifetimes.

I just left it at that and told her to go there and describe what she saw.  (It’s more interesting that people describe their own image instead of me telling them what it should look like.)  She described it kind of like a library, but with energy associated with each “book.”

I asked her to go to her personal book and after a moment she said, “The pages are magical!  Some pages have words, others show pictures, sometimes the pictures are moving, other pages are just energy, and then there are pages that FEEL like there’s something on them but are actually blank.”

I said, “This is your book!  You know everything about this book.  What do those blank pages mean?”

After a moment, “They are soul experiences I have yet to experience in my normal time, but the book still seems to kind of know what’s there but just can’t show me right now.”

I asked if she ever played with Tarot cards and ever gave a reading for someone.  She nodded yes, so I said, “Just like you did with those cards, I’d like you to think about your challenge that you’d like to solve and then page through your book – eyes open or closed – and when you come to that place that somehow relates, please let me know with a slight nod and a deep breath.”

When I saw that I gave suggestions about traveling through time and space, back to a time before this time, a place before this place… And then…  “Step down!  Be there now.  Be on the Earth.” 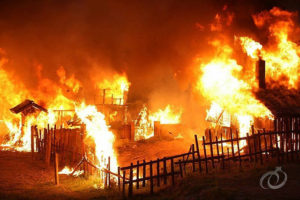 After a moment, I saw her face change and her breathing labored.  Without getting into every detail, she described that she’d been running away from people, that there are houses in the village on fire, and that she was looking for someone, “I have to find her!”

I still noticed her pained look and her breathing.  When I asked about that, she said, after a little thought, “I was stabbed.  Someone stabbed me in the back or threw a spear at me when I was running away…”  After a long pause, where she seemed to kind of breathe through it, she said, “It really hurts, but I’ll work my way through it.”

I asked what she meant by this and she just said, “It hurts so much, but I’ll be ok.”

My favorite phrase during a past life experience is, “Time changes…  what happens next?”

“They’re with me!  The little girl and woman, they’re with me.  We’re running.  We’ve been running for hours, but our abilities give us the energy we need.”

I asked about her abilities and she said, “That’s what we use to help people.  We’re still running.  The little girl is getting tired but we have to keep going.”

There was more running, rest, they found a hiding place, and eventually they got to where they needed to go.  But then she said, “They’ve been here.  They know…”

I said, after a long silence, “What happens next?”

“They’re here.  I hid the girl.  The woman already ran away.”  Then a long silence.

Her face turned from pained to very peaceful, her breathing once heavy, became calm.  Eventually she said, matter-of-fact, “I’m dead.  They killed me.  The girl got away.  I’m with her now but she doesn’t know it.  She’s scared.  Hungry.  I can’t help her anymore.”

More silence.  Then she got real sad, but still peaceful somehow.  “They got her, too.”

After a long silence, I brought her back to the library of The Akashic Records and suggested that any lessons, anything that she needs to remember both on a conscious and subconscious level, will just come to her at just the right time when she needs it the most.

I gave her other suggestions and brought back through the entire session back into the room into the chair.  We talked afterwards…

“I get it now.  I keep drugging myself because I’m afraid.  I was killed in that life because I was the healer.”

I asked, “Is there any reason to believe you’ll get killed in THIS lifetime?”

We talked more about this as she processed and recalled more images from the session.  So, just to bring this to an end, there are many examples of past lives where people were persecuted or killed because of things they said or did.  Often, for example, someone that’s really, really quiet was likely killed in a past life for something that was said.

In this case, she was drugging herself in a way that was subconsciously protecting her.  She was afraid to open up 100% to the energy, she was afraid these abilities would become known to the wrong people.

This session took place just a few days ago.  Sometimes the change is immediate but often there’s a period of mental/spiritual processing before everything sinks in.  I will contact her in the future to see how this session impacted her.

There is no doubt that she is no longer afraid to work and truly enhance her skills.  The thing I’m really curious about is if the dyslexia and the need for the drugs are also connected to this past life, if her soul or subconscious created the dyslexia so she’d have to drug herself which would, in turn, numb herself to her abilities to heal.  There is also the possibility (and I actually think it’s a combination of these) that she also needed the karma of experiencing the intense anxiety and dread whenever forced to read and maintain focus, something that she’s going to need to learn how to handle and not let it control her.