Something interesting has been happening here at Berkshire Hypnosis: We’ve seen a huge increase in the number of people seeking to lose weight. But what’s interesting is that almost every client has exhibited a similar pattern:

Despite plenty of exercise or even though they eat quite healthy, they still remain heavy.

This goes against what we all know about weight loss! If you exercise more and consume fewer calories, you will lose weight, right? Logically, medically, scientifically… we’ve read that if you burn more calories than you take in, the weight must drop off. But this is not what’s happening. Something inside the body is not working properly!

With most diets and exercise programs, and even with most hypnosis for weight loss, people experience that initial phase of enthusiasm and conviction and commitment. They lose weight. They exercise more. They feel so much better about themselves and about things in general.

But then, at some point, this fades away and people return to normalcy. And once they’ve returned, the weight soon follows.

The only way to truly develop long-term healthy behavior changes is to get to the true source of the challenge. Instead of approaching this from the OUTSIDE (where they hear, read, or experience being directed to change), people must address this challenge from the INSIDE – from their inner truth, so to speak.

They must finally face their demons and resolve the problem themselves! And they must resolve this EMOTIONALLY and spiritually, not logically or with motivational self-talk. The change has to be internalized to be fully realized.

Isn’t this how it’s always been? We try to tell our youth, for example, “Don’t do this. That’s a bad thing. I’ve been there, done that. I know what’s going to happen.” But they do it anyway! And then they believe they are the first to experience this thing and try to share with others, “Hey, don’t do that. It’s a bad thing. I know!”

When they got the information from outside, it didn’t really register. It did not create that permanent change, that inner knowing or inner truth. ONLY until they experienced the problem and then solved it themselves do they experience permanency. 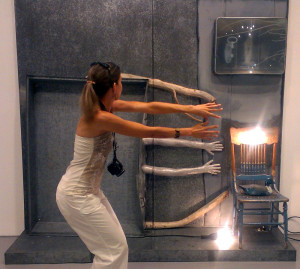 So, what are some of the experiences we’ve had during sessions?

Well, as a start, we’ve had several people starve to death in past lives! (I tried to make that come across as a positive, but I think I failed.)

And in multiple cases, it was more than just starving to death. One person got caught stealing food for his family and was thrown in a dungeon and purposely ignored. Another died while on a long journey to acquire food for his village (and family).

With both of these clients, they not only felt like they had to eat everything on their plate, but they also made significant efforts to stockpile food – both literally (in their completely full refrigerators and freezers) and on their body. One stated, “I could not even slide a Hershey bar into the freezer if I wanted to.” In the back of their minds, they felt as though they always needed to be ready for a starvation disaster.

A few weeks after the sessions, the “Hershey bar” freezer lady was proud to say that she had donated much food to shelters and had, “for the first time in 20-30 years, visible space in the back of my refrigerator!” (And she dropped weight since she also no longer felt like she had to prepare herself for a month or two of not having any food to eat.)

Another person stated that she no longer felt ravenous at the beginning of every meal, in which she often devoured every single crumb on her plate and even sometimes what’s left on others’. (“You can’t waste it!”)

During one session, it came out that she was in the hospital for a few months when she was born due to malnutrition – she literally almost died of starvation as a newborn due to certain complications. Her entire life she was always a heavy girl, partly because of this subconscious programming (to eat or die) and partly due to her mother’s subconscious programming to “never, ever allow her daughter to be hungry again.”

One client was a toddler raised in a refugee camp in Cambodia. She was too young to remember anything. Her family, however, especially brother and sister, very clearly recall living for a few years very abused and on the edge of starvation. Food to this family not only meant survival but was also the center of every reward. Food, to them, was the greatest gift in the world as it literally meant life. This woman grew up with this underlying programming, which needed to be re-experienced before she was able to change and finally begin to shed the weight.

Other causes of being overweight were stress (you already knew this, didn’t you?) and not getting enough sleep. For the latter, there is a lot of recent knowledge published on sleep and I highly recommend purchasing the book, Why We Sleep: Unlocking the Power of Sleep and Dreams. Essentially, if you’re tired or if you’ve not had enough sleep, your body will signal to you that you need an energy boost.

And we all know stress is bad in so many ways, but the SOURCE of stress is often far more than just a challenging workplace or home. Often this begins with issues that may now seem insignificant in retrospect. For example, one woman’s parents thought going to that Theater Camp was going to be a lot of fun for their daughter. But when she was forced to audition a song in front of all those strangers, her reaction from that point on to ANYTIME she was just around strangers and had even just a hint of being in the public eye, snowballed into an inexplicable amount of stress on the body by just going to work in a generally peaceful workplace.

I wish weight loss was just eating right and exercise. But as many have experienced, it’s much more than that.

I encourage anyone to just come and talk to me. There is no charge to just talk. And if I don’t think I can help, I’ll tell you or I’ll point you to others who can.

Best wishes and best health to you.